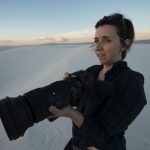 Hi! I’m a professional editor, cinematographer, and director based in Austin TX. In the commercial world, I’m Lead Editor for Dell Blue’s Consumer, Small Business and Gaming division. Over the years, I’ve had the pleasure of working with brands such as Alienware, Goodwill, GQ Magazine, and Charles Schwab in various capacities, and contributed to several ADDY and Midwest Emmy awards.

In the indie filmmaking world, I’m most comfortable behind the camera. In 2015/2016 I collaborated with writer/director Efi da Silva and producer Julie Cunningham to bring the feature film Four-Way Stop to life as cinematographer and editor. The film won several awards, including an award for Best Cinematography at the St. Louis International Film Festival in 2015. The film continues to drive important conversations about race in America.

I’ve has spent my entire life building worlds in my head. Hailing from the middle of Illinois, summers were spent watching the corn grow, harassing the cats, and driving aimlessly down country roads. A lot of that driving time was spent listening to music and letting stories play out in my head. In highschool, I collaborated with my mom, who worked for the local radio station. Together, we made our first podcast–or what would have been the first podcast if we’d started just a little bit later, since podcasts didn’t exist yet. “I Have a Story” was broadcast on WGEL and told the stories of real people from our community. From stories about musicians to ghost stories to UFO sightings, it made the lives of us rural flatlanders sound a little more interesting. Mom did the interviews and told the stories while I cobbled together a makeshift recording studio using the home stereo and a small (very) purple four-channel mixer from the Radio Shack down the street. The episodes were mixed live and recorded directly to cassette tape.

Eventually I found out I could do the same thing with video. We didn’t have a computer or video camera, but we did have a VCR, a mixer, and a home stereo to dissect. The camera was borrowed. The urge to tell stories was so desperate that I’d spend hours sitting in front of the TV with my Frankenstein editing system. Years later I earned a B.A. in filmmaking at Webster University in St. Louis. Since then I’ve contributed to several short and feature length projects as a cinematographer, and produced several of my own. I even traveled the world as a camera operator for the History channel. My path eventually led to Austin, TX, where I live and work today in post production.

With audio drama, I feel like I’m returning to my roots, so to say. But today, the available tools are a little different, and I’ve come a long way as an editor and producer. I’m excited to take the elaborate world that lives in my head and build it using all these amazing new media technologies that we have at our fingertips.